Everyone knows that perseverance is important. You’ve probably heard the quote “If at first you don’t succeed, try again” or seen the commercial that talks about falling down 7 times and standing up 8. The lesson, of course, is that few people achieve anything great without first overcoming a few obstacles.
Preaching about the importance of perseverance is easy. Actually experiencing failure and continuing on undeterred; now that’s tough. But the 7 stories below prove that it can be done. These famous entrepreneurs exemplified perseverance. Maybe one of them will inspire you to overcome whatever obstacle is currently standing in your way.

Milton Hershey
Milton Hershey had a long path to the top of the chocolate industry. Hershey dropped out of school in the 4th grade and took an apprenticeship with a printer, only to be fired. He then became an apprentice to a candy-maker in Lancaster, PA. After studying the business for 4 years, Hershey started three unsuccessful candy companies in Philadelphia, Chicago and New York.
Hershey was not about to give up, so he moved back to Lancaster and began the Lancaster Caramel Company. His unique caramel recipe, which he had come across during his earlier travels, was a huge success. Hershey, who was always looking ahead, believed that chocolate products had a much greater future than caramel. He sold the Lancaster Caramel Company for $1 million in 1900 (nearly $25 million in 2008 dollars) and started the Hershey Company, which brought milk chocolate — previously a Swiss delicacy — to the masses.
Not only did Hershey overcome failure and accomplish his goals, but he also managed to do it close to home. Hershey created hundreds of jobs for Pennsylvanians. He also used some of his money to build houses, churches, and schools, cementing his status as a legend in the Keystone State.

Persistence is key. But it also helps if you have a solid business plan from the beginning. 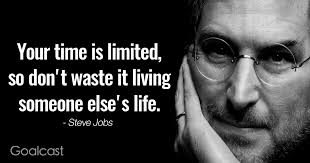 Steve Jobs
You always hear about a “long road to the top,” but perseverance isn’t limited to the early stages of a person’s career. Oftentimes, failure can occur after a long period of success.
Steve Jobs achieved great success at a young age. When he was 20 years old, Jobs started Apple in his parents’ garage, and within a decade the company blossomed into a $2 billion empire. However, at age 30, Apple’s Board of Directors decided to take the business in a different direction, and Jobs was fired from the company he created. Jobs found himself unemployed, but treated it as a freedom rather than a curse. In fact, he later said that getting fired from Apple was the best thing to ever happen to him, because it allowed him to think more creatively and re-experience the joys of starting a company.
Jobs went on to found NeXT, a software company, and Pixar, the company that produces animated movies such as Finding Nemo. NeXT was subsequently purchased by Apple. Not only did Jobs go back to his former company, but he helped launch Apple’s current resurgence in popularity. Jobs claims that his career success and his strong relationship with his family are both results of his termination from Apple.

Simon Cowell
Nowadays, Simon Cowell is a pop icon and a very wealthy man. But early in life, Cowell faced his fair share of struggles. At age 15, Cowell dropped out of school and bounced around jobs. He eventually landed a job in the mail room of EMI Music Publishing. Cowell worked his way up to the A&R department, and then went on to form his own publishing company, E&S Music.
Unfortunately, E&S folded in its first year. Cowell ended up with a lot of debt, and was forced to move back in with his parents. But he never gave up on his dream of working in the music industry, and eventually landed a job with a small company called Fanfare Records. He worked there for 8 years and helped the company become a very successful label. From there, Cowell spent years signing talent and working behind-the-scenes before launching the “American Idol” and “X-Factor” franchises that made him famous.
Even though he is rich and successful, Cowell continues to work on new projects. This kind of dedication no doubt helped him overcome his early roadblocks.

Thomas Edison
When he was a young boy, Thomas Edison’s parents pulled him out of school after teachers called him “stupid” and “unteachable.” Edison spent his teenage years working and being fired from various jobs, culminating in his termination from a telegraph company at age 21. Despite these setbacks, Edison never deterred from his true passion, inventing. Throughout his career, Edison obtained 1,093 patents. And while many of these inventions — such as the light bulb, stock printer, phonograph and alkaline battery — were groundbreaking, even more of them were unsuccessful. Edison is famous for saying that genius is “1% inspiration and 99% perspiration.”
One of Edison’s greatest stories of perseverance occurred after he was already wildly successful. After inventing the light bulb, Edison began a quest to find an inexpensive light bulb filament. At the time, ore was mined in the Midwest, and shipping costs were incredibly high. To combat this, Edison opened his own ore-mining plant in Ogdensburg, New Jersey. For roughly a decade, Edison devoted all his time and money to the plant. He also obtained 47 patents for inventions designed to make the plant run more smoothly. And after all of that, Edison’s project still failed thanks to the low quality ore on the East Coast.
But as it turned out, one of the aforementioned 47 inventions (a newly-designed crushing machine) revolutionized the cement industry and earned Edison back nearly all of the money he lost. In addition, Henry Ford would later credit Edison’s Ogdensburg project as the main inspiration for his Model T Ford assembly line, and many believe that Edison paved the way for modern-day industrial laboratories. Edison’s foray into ore-mining proves that dedication and commitment can pay off even in a losing venture.

George Steinbrenner
Before “The Boss” assumed ownership of the New York Yankees, he owned a basketball franchise called the Cleveland Pipers. The Pipers were part of the American Basketball League, and in 1960, under Steinbrenner’s helm, the franchise went bankrupt.
When he eventually took over the Yankees, Steinbrenner’s struggles didn’t end. Most baseball fans will remember the team’s drought in the 1980s and early 1990s. As the team suffered, Steinbrenner was often criticized for his executive decisions, which included questionable trades and frequent changes to the Manager position. Though his methods were controversial, Steinbrenner stuck to his guns, and it paid off. The Yankees made an impressive six World Series appearances from 1996-2003, and remain Major League Baseball’s most profitable team year after year.
Steinbrenner is known for his shrewd business tactics, but he’s also not afraid to put his money where his mouth is. The Yankees have the highest payroll in baseball, and they’ve been in contention every year since the mid-90s. Even when the Cleveland Pipers went bankrupt, Steinbrenner offered to pay back the team’s investors, a promise he eventually made good on.
Steinbrenner has been quoted as saying, “I never wanted anybody to say ‘I went down a path with George Steinbrenner and lost money.’”

J.K. Rowling
J.K. Rowling, author of the Harry Potter books, is currently the second-richest female entertainer on the planet, behind Oprah. However, when Rowling wrote the first Harry Potter book in 1995, it was rejected by twelve different publishers. Even Bloomsbury, the small publishing house that finally purchased Rowling’s manuscript, told the author to “get a day job.”
At the time when Rowling was writing the original Harry Potter book, her life was a self-described mess. She was going through a divorce and living in a tiny flat with her daughter. Rowling was surviving on government subsidies, and her mother had just passed away from multiple sclerosis. J.K. turned these negatives into a positive by devoting most of her free time to the Harry Potter series. She also drew from her bad personal experiences when writing. The result is a brand name currently worth nearly $15 billion.

Walt Disney
As a young man, Walt Disney was fired from the Kansas City Star Newspaper because his boss thought he lacked creativity. He went on to form an animation company called Laugh-O-Gram Films in 1921. Using his natural salesmanship abilities, Disney was able to raise $15,000 for the company ($181,000 in 2008 dollars). However, he made a deal with a New York distributor, and when the distributor went out of business, Disney was forced to shut Laugh-O-Gram down. He could barely pay his rent and even resorted to eating dog food.
Broke but not defeated, Disney spent his last few dollars on a train ticket to Hollywood. Unfortunately his troubles were not over. In 1926, Disney created a cartoon character named Oswald the Rabbit. When he attempted to negotiate a better deal with Universal Studios — the cartoon’s distributor — Disney discovered that Universal had secretly patented the Oswald character. Universal then hired Disney’s artists away from him, and continued the cartoon without Disney’s input (and without paying him).
As if that wasn’t enough, Disney also struggled to release some of his now-classic films. He was told Mickey Mouse would fail because the mouse would “terrify women.” Distributors rejected The Three Little Pigs, saying it needed more characters. Pinocchio was shut down during production and Disney had to rewrite the entire storyline. Other films, like Bambi, Pollyanna and Fantasia, were misunderstood by audiences at the time of their release, only to become favorites later on.
Disney’s greatest example of perseverance occurred when he tried to make the book Mary Poppins into a film. In 1944, at the suggestion of his daughter, Disney decided to adapt the Pamela Travers novel into a screenplay. However, Travers had absolutely no interest in selling Mary Poppins to Hollywood. To win her over, Disney visited Travers at her England home repeatedly for the next 16 years. After more than a decade-and-a-half of persuasion, Travers was overcome by Disney’s charm and vision for the film, and finally gave him permission to bring Mary Poppins to the big screen. The result is a timeless classic.
In a fitting twist of fate, The Disney Company went on to purchase ABC in 1996. At the time, ABC was owner of the Kansas City Star, meaning the newspaper that once fired Disney had become part of the empire he created. And all thanks to his creativity (and a lot of perseverance).

what is your story please share with us!  We all can learn from one another to succeed.

tell us your story !