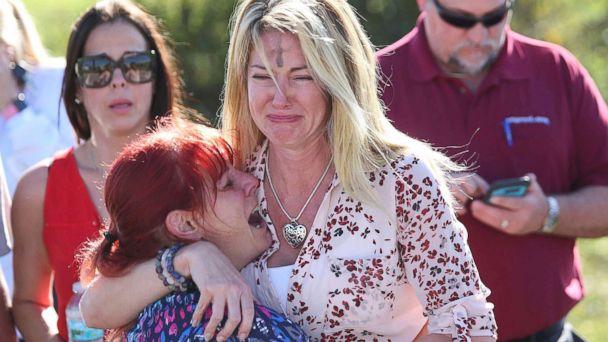 We live in a world of so many distractions that we fail to give our own kids the proper care, love and understanding of what it is that they are going through at their age.

We have become so accustomed to just giving them their wants instead of their needs.

we try to fill in the that void with temporary things such as tablets, game consoles, and many materialistic things that will only make them happy temporarily.

Love and understand your children so that they can share and give in return that love and care to one another.

Guns and mental illness are merely attributes of these shootings, they are not the reason why numerous kids are killing people. It is time we stopped fooling ourselves and started asking why our youth are so disaffected that they’re lashing out, murderously, at the world we’ve given them.

While increased regulation and improved mental health may decrease the number of deaths from these tragedies, to suggest they are solutions to a society-wide epidemic of youth killing people is a logical fallacy: Guns don’t cause people to kill, and one individual’s illness does not create a nationwide epidemic of unprecedented killings.

Our children are disaffected because they are angry, and have every right to be, and no one’s listening to them. Why, because, we have raised them in a society that is in blatant moral contradiction of what we teach them, and yet we deny it. We tell them “do unto others,” to live equally, and in peace, while everything we do proves otherwise.

As a musician and poet, it’s my job to take the pulse of my country and world and express it in service to the betterment of humankind. From the day that Michael Carneal walked into Heath High School on December 1st, 1997, I knew something was terribly wrong. Something bigger than guns or individual illness.

I immersed myself in the issue of school shootings, and toured the country singing to and speaking with thousands of youth the same age as the shooters, would-be killers. In my song “West Kentucky” about Carneal’s rampage, I reflected as a southern boy reared in gun culture aware that in this disaffection, something horrifying was at our doorstep:

“Now this young boy is charged with murder
And not one tear flows from his eyes
When they asked him for a reason
All he says is I don’t know why…
I myself am from Virginia
And one thing I know is clear
Regardless of a reason
This did not used to happen here.”

Immediately after the Columbine shootings occurred, I wrote my song “The Darling Son,” a song based on an ancient ballad called ‘Edward’ or ‘The Twa Brothers,’ in which a mother questions her son who has killed his brother and fails in his attempts to falsify his story.

In my song, the mother confronts her son who has just killed his classmates, shortly before he kills himself:

The thousands of high school and college student that you hear in this live recording, all the same age-group as our school shooters, are cheering each word because the song is giving voice to what is bothering them, to something they live with everyday that is making them angry, but that no adult has ever admitted to them.

Everywhere I’ve gone, youth have come up to me after shows, often in tears, thanking me, asking if they can hug me, telling me I’m the first adult who’s ever talked to them about the truth of their world, thoughts they say they’re afraid to express openly to adults they think are not receptive.

Our children are not stupid. Armed with the internet, they have access to more information than prior generations could ever imagine. As much we may like to ignore it, we cannot pull the wool over their eyes as though it were 1975.

We have given them a world in which they know millions have been killed or made refugees in a war waged over oil that is causing global warming, voted for by politicians bought by corporate interests, while their own parents, many of whom are divorced, work day and night to make ends meet, unavailable to them, while pop culture sells unprecedented wealth, debauchrery and violence to them daily. And we act as though the problem is guns and mental health.

We have created a society that is morally bankrupt, and the victims are our children who have lost faith in authority due to our moral duplicity. This is the cause of school shootings.

By failing to engage our youth in honest conversation about their world as they see it, we sentence the most sensitive, already neglected, but often most gifted, inquisitive of our youth, to despair. If we continue this denial, we will have more of these children pushed to the point of breaking, regardless of gun control.

Every child of ours could become a killer, or a changemaker. It is up to us to give them the necessary moral consistency, inspiration and support to become the latter.

But, in the 18 years since the dawn of school shootings, I have yet to see our politicians or mainstream media respond to one of these tragedies by asking the youth themselves what it is they are angry about. Now’s the time to start.

We need a campaign to listen to our youth. We need to work with and inspire them to channel their justified feelings into groundbreaking work for good before it festers in them unresolved and explodes. I’m prepared to dedicated myself to the effort.